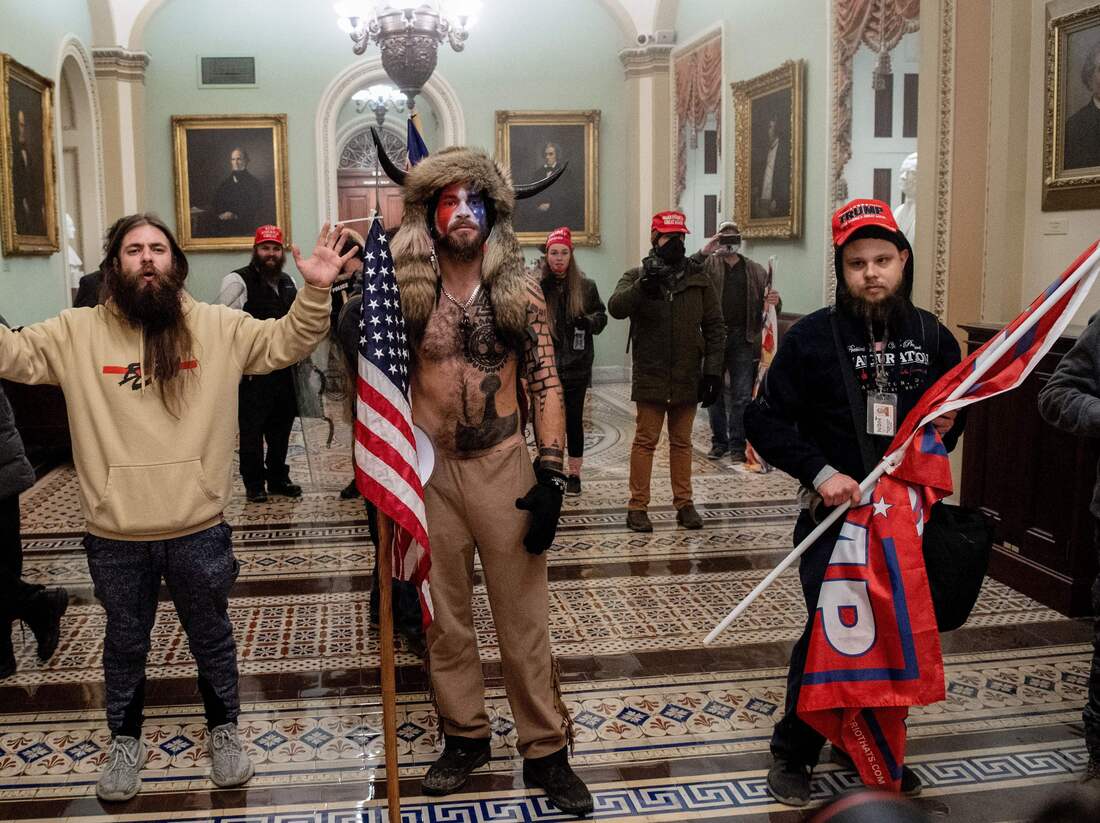 Supporters of President Donald Trump, including Jake Angeli (center), a QAnon supporter known for his painted face and horned hat, standing inside the U.S. Capitol on Jan. 6, 2021. Demonstrators breeched security and entered the Capitol as Congress debated the 2020 presidential election Electoral Vote Certification. 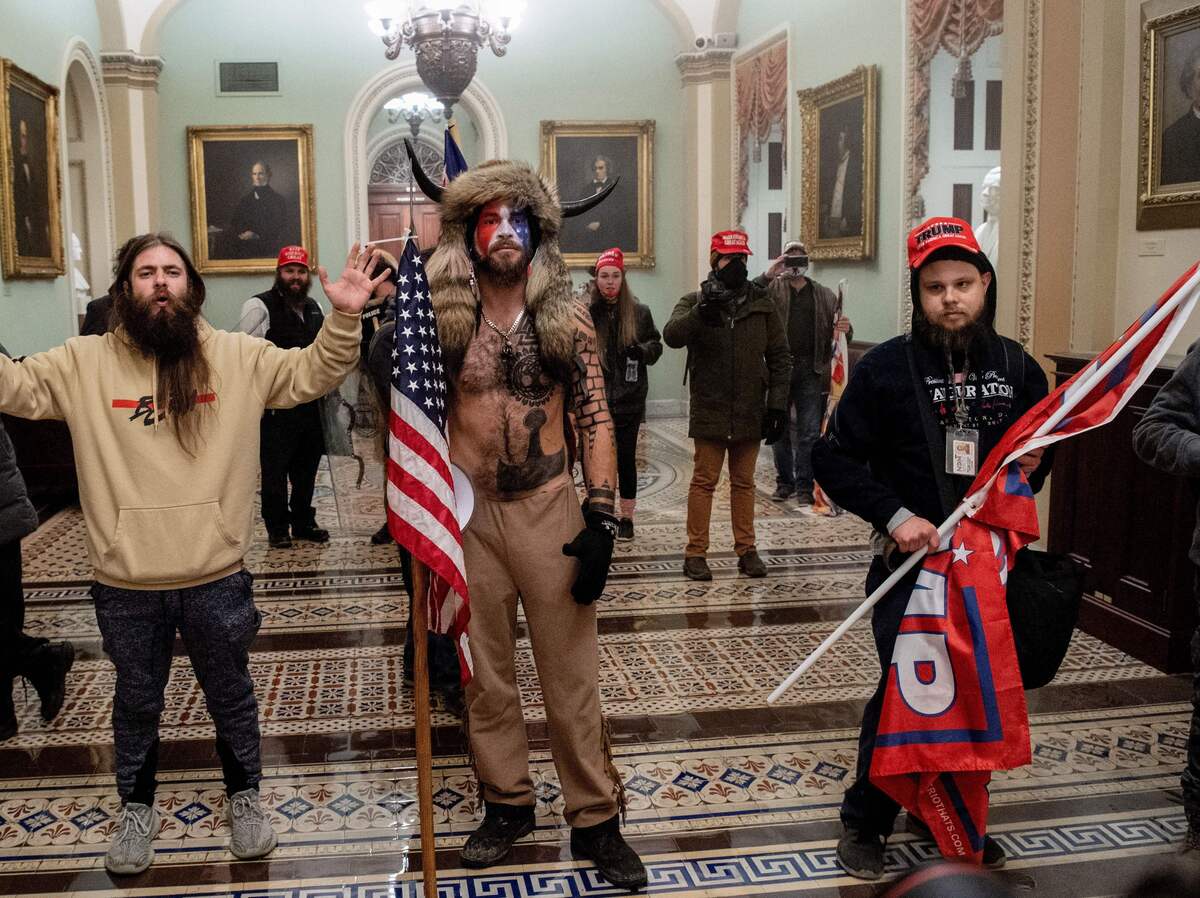 Supporters of President Donald Trump, including Jake Angeli (center), a QAnon supporter known for his painted face and horned hat, standing inside the U.S. Capitol on Jan. 6, 2021. Demonstrators breeched security and entered the Capitol as Congress debated the 2020 presidential election Electoral Vote Certification.

The FBI and Washington, D.C. Metro police are asking the public for help identifying some of the people involved in assaults, break-in and vandalism at the Capitol on Wednesday. The FBI is asking anyone with information to submit it here, along with any photos or video.

The Metropolitan Police Department in Washington, D.C., has posted dozens of photos of some of the individuals they are calling “persons of interest” that were part of the invasion of the Capitol.

MPD is offering a reward of up to $1,000 to anyone who provides information leading to an arrest.

But already, news organizations and people active on social media have begun identifying some of those who played prominent roles in the unprecedented scene at the Capitol. One of the most prominent is Richard Barnett who was photographed with his feet up on House Speaker Nancy Pelosi’s desk. Afterwards, he proudly identified himself to New York Times reporter Matthew Rosenberg.

Meet Richard “Bigo” Barnett, who stood outside the Capitol, his shirt open and his chest bared to the cold, loudly bragging about how he had broken into the speaker’s office. https://t.co/kOrzss4NJ5

Barnett from Gravette, Ark., is part of a pro-Trump group, NWA Stand. He told The Times he left a note on the desk for Pelosi and a quarter. The Washington Post says he’s posted comments on social media supporting white nationalism. After Barnett’s photo went viral, the mayor of Gravette, Kurt Maddox posted a message on Facebook that police had received calls asking how they would respond. Maddox said Barnett’s actions aren’t representative of the town.

“We do not in any way condone violence, rioting, or breaking the law,” he said.

Tim Gionet was another who was involved in breaking into House Speaker Pelosi’s office. Gionet is well-known activist, often described as an internet troll, who has been banned from Twitter and YouTube. He goes by the name, “Baked Alaska,” and livestreamed the break-in Wednesday.

The Anchorage Daily News says the livestream was viewed by 16,000 people.

Another prominent character who was part of the mob inside the Capitol, Jake Angeli, is a QAnon supporter, known for his painted face and horned fur hat. He’s been a regular at pro-Trump rallies in Arizona. Angeli was one of those photographed standing on the Senate dais behind the desk where a little earlier Vice President Mike Pence had been presiding.

One of the most viral photos from Wednesday’s mob scene captured a smiling man apparently stealing one of the Capitol’s lecterns. People on social media quickly identified him as Adam Johnson, from Parrish, Fla. The Bradenton Herald says his wife is a doctor and he has five children.

There have already been consequences for some of those involved. A Maryland company, Navistar Direct Marketing, says it has fired one of its employees photographed inside the Capitol. He hasn’t been identified yet. But in photos, he’s wearing a lanyard with his Navistar employee identity badge clearly visible.

A Texas company, Goosehead Insurance said it has fired Paul Davis, its associate general counsel, after his participation in Wednesday’s violence. Davis posted a video complaining of being teargassed as the mob was trying to enter the Capitol.

This is Paul Davis. Paul is a lawyer. He’s also associate general counsel & director of human resources at Goosehead Insurance. Today he stormed the capitol building in an attempt to stage a coup against the US government and documented it (!) on Instagram. @followgoosehead pic.twitter.com/eTkoK92ujL

(CNN) —   Apple may have ushered in the wire-free craze with its now-ubiquitous AirPods, but these days, there seems to be an endless influx…

This story is adapted from “Madam Speaker: Nancy Pelosi and the Lessons of Power,” which will be published April 20 by Twelve Books. Author Susan Page,…

With the help of Bill Siemering, NPR was able to identify its core values ​​and goal to diversify its storytelling. Wanyu Zhang hide caption toggle…

Care to do some digging of your own? Just click on the headers below, and Dig In! If you are looking for specific documents that…

Republican lawmakers are coming to the defense of Sen. Tim Scott after he faced a torrent of racist responses from some Democrats to his rebuttal…